In politics winning is always the goal, but not all wins are equal. A win built on declining populations and shrinking voter bases, is still a win. But a win based on growing voter bases brings with it hopes of a naturally rising tide of voter support

This is the angst behind the comments of many Republicans, who fear their party’s deep deficit with Hispanic voters in 2012 is a very bad sign. They fear falling further behind in a game that is changing before their eyes.

So with that in mind, Politics Counts tried to map the battle for growing America. We went through Tuesday’s presidential results by county and compared them to Census figures to see who won the “growth vote” Tuesday. 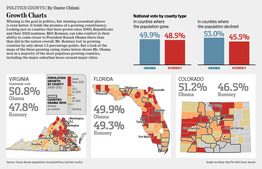 Looking at the numbers that way, results for just growing counties, may bring some solace to the Republican party and its nominee Mitt Romney. Underneath, however, there also appears to be some issue strengths for President Obama and the Democrats in places that matter most on Election Day.

At the national level, if the vote had only come from counties with growing populations it would have been closer – Mr. Obama won 49.9% of the vote out of those counties, while Mr. Romney won 48.5%. (The current tally for the entire nation is 50.5% for Mr. Obama to 48% for Mr. Romney.)

And at the state level, the growing county vote would have made it closer for Mr. Romney in some important growing states. For the rest of this Politics Counts column, please visit the Wall Street Journal's website.